← Too big to fail? Gosh, I hope not…
Monday Night’s a Great Night for Blues….and Poetry →

“These vagabond shoes are longing to stray…”

Tea at the Morgan, including Mrs. Morgan’s sugar cookies and a pot of Harney & Sons English Breakfast

Self portrait with walking sticks. Somewhere on East 34th, heading toward Madison Avenue

We ran into the Spring Street Mural just a few steps down from the Jen Bekman Gallery where I saw Sarah McKenzie’s show Void. I felt very art smart when I asked if she had any works-on-paper for sale (which are usually less expensive than works on canvas).

Ceci Cela is a French bakery on the Lower East Side with a tiny little sit-down-space squished in the back. It is hands-down one of my favorite places in NYC. For lunch I had a baguette with ham and brie. For dessert, a doppio espresso with tiramisu, which I suspect was actually a baba au rhum as it had raisins. 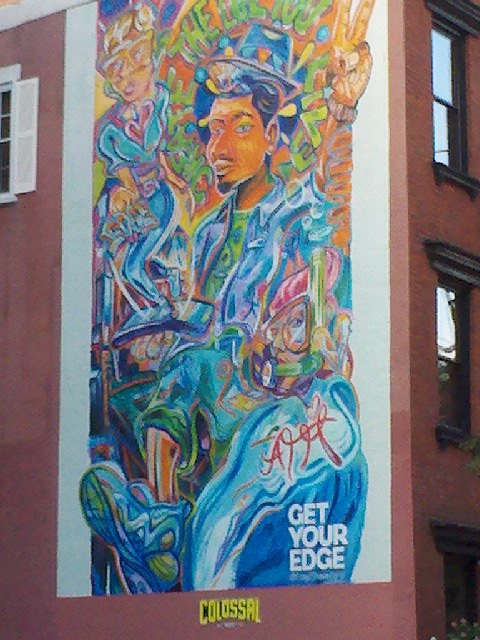 This mural was across the street from an old cloistered church. It felt like one minute we were in NYC, the next we had stumbled into Europe for just a block or two.

Many years ago I ran into a man I used to know—Todd, a clarinet player—near the West 4th basketball courts. He told me he was working at Cafe Wha? and I should meet him there. He was a very good kisser, but I couldn’t understand what he was saying so I nodded and smiled and never saw him again. But I always keep an eye out for him when I’m in New York.

Jimi and me and music, sweet music… 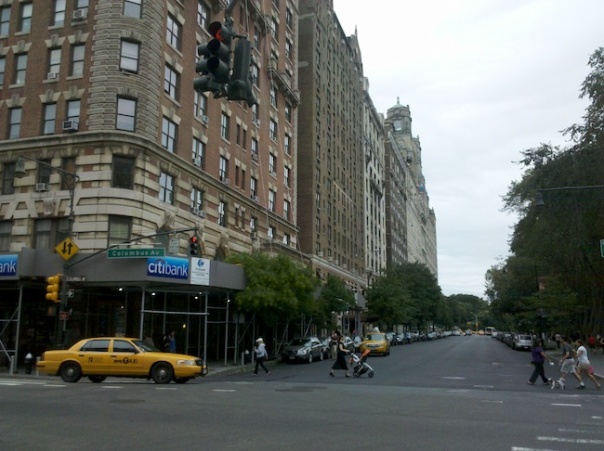 “People stop and stare/They don’t bother me/For there’s no where else on earth that I’d rather be./Let the time go by I won’t care/if I’m standing on the street where Matt Dillon lives.”

Posted on September 13, 2011, in Picture This and tagged Cafe Wha?, New York City, self portrait. Bookmark the permalink. 2 Comments.

← Too big to fail? Gosh, I hope not…
Monday Night’s a Great Night for Blues….and Poetry →