The Things You Learn Just By Changing Your Sheets 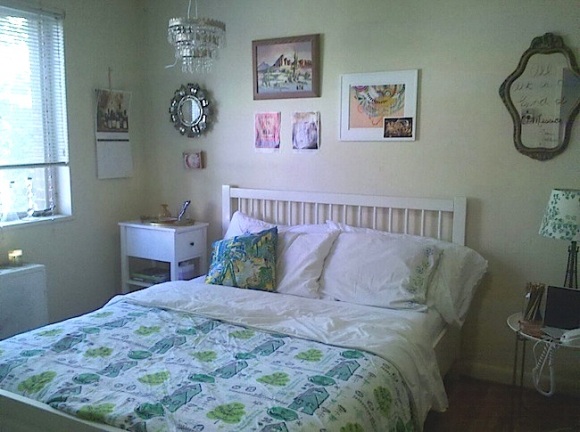 Full disclosure: My bedroom doesn’t actually look like this anymore. But someone’s too lazy to go finish making the bed and take a photo. That someone may—or may not—be yours truly.

Several years ago I was hospitalized with a case of pneumonia so bad that I ended up on a ventilator, only slightly conscious, as one of my lungs decided to simply stop working. The rebellious lung did ultimately decide to get back to work, but after a couple months of being bedridden and hardly eating anything,* my muscles were so atrophied that I had to go to rehabilitation to learn to walk again and dress myself and all those basic movements we take for granted. Though I made fairly rapid improvement, it was pretty easy to tell which of my muscles didn’t get used very often because they were the ones that continued to ache long after I stopped using a walker and a cane. One set of such muscles were the ones in my wrists. I could carry things, but changing the sheets on my bed became quite a painful task with the consequence that I just didn’t do it very often.

This morning as I was changing my sheets I realized that my wrists didn’t hurt at all, and the mattress didn’t feel like the dead weight it did seven years ago. I also realized that it had probably been a couple of years since I’d felt that particular ache, yet I continued to stick to my lax sheet-changing schedule. Though my reality had changed, I kept responding to the situation from a perspective of how it used to be.

It makes me wonder—how many actions do we take or not take or which situations do we avoid because of how we used to react? Is it possible that our emotional/spiritual/intellectual muscles have gained—or regained—their strength in that particular area but we just haven’t noticed? To borrow from Mr. Arsenio Hall, that’s what’s making me say “hmmmmm” today.

*I have no memory of what transpired after I asked the ICU docs to put me on the ventilator because I couldn’t “make myself breathe” but I think I was intubated for about a week. I had, however, been on a downward spiral for a few months before that moment of crisis.